How this mission was born

THOUSANDS of Hawaiian shirts have now been sent overseas for our deployed heroes! My name is Gwen Pollard.

This really started out as a project for my own son’s deployed troop in March 2017. He deployed from Fort Campbell, Kentucky, with the 101st Airborne Division. He came out on base in a Hawaiian shirt and the soldiers laughed. Some wished that they had one, so he asked me to send a few for him and his buddies. They were in a dangerous place, on a combat mission. Stress levels were high, but a silly Hawaiian shirt broke through the tension, and made them laugh. It was a light in the darkness. I knew that there were approximately 300 soldiers near him, so I began a project to collect a Hawaiian shirt for each of them. Each shirt would have a thank you note tucked into the front pocket, to let our heroes know how much we appreciate them. My request went viral! What!?

I was on the news, and radio shows coast to coast, and a local morning show. Then Good Morning America added a story about it to their web page. A congressman (Jeff Duncan) surprised me at work with a flag that was flown over the Capitol in honor of this mission! I’ve had return gifts from commanders in gratitude of lifting their soldiers spirits. Former president of Disney Pixar’s Animation studios, Ed Catmull, joined by sending a huge load of Disney movie Hawaiian shirts! A Navy Master Chief Petty Officer, donated his own Hawaiian shirts. One Sargent 1st Class even came to my home, once he returned from Iraq, to thank me personally, on behalf of his soldiers. AMAZING!

Deployed soldiers from everywhere, have asked to be included. Even more were nominated by friends and family. People from all across America are continuing to send in new or used Hawaiian shirts, thank you notes, shipping donations, and snacks for our soldiers. The address to send in donations is located on this page, and on our Facebook page. This project has turned into a real mission! I really don’t think it was an accident at all. It was meant to be!

We are sending Hawaiian shirt thank-you parties to our deployed heroes all over the world. It means the MOST when they send return pictures of them in our Hawaiian shirts! To see them standing there, in camo pants and Hawaiian shirts, with huge smiles, is breathtaking!

It’s certainly a fun, and amazing mission for everyone involved, and we don’t plan on stopping anytime soon. Please join us!

Testimonials from our HEROES!

”This is the real deal! We never knew how much America cared about us!”

“It is so nice to not be forgotten, you made us smile!”

”There is JOY on our base today, THANK YOU!”

How you can help!

Send in your new or gently worn Hawaiian shirts to:

We also accept thank-you notes for our heroes to slide into the shirt pockets, along with snacks for our heroes and financial support, which can be mailed in, or sent through Pay Pal/ Gwen Pollard Hawaiian Shirts For Deployed Soldier.

Follow us on Facebook for real time donations and new pictures of the heroes who receive our Hawaiian shirts! Become friends with other team members! Watch as the Hawaiian shirt shipments are heading out.


We thank everyone who sends in Hawaiian shirts, financial contributions, thank you notes, and snacks! The Facebook page will give you a closer connection to our mission, and what we are currently working on.


See your name and your donation on the Facebook page!

Q: How many shirts do you send each troop?

A: Most troops receive 120 Hawaiian shirts, plus two boxes of snacks & fun extras like games/luau decorations

Q: What shirt sizes are most popular?

A: Large and XL

Q: How can my troop be included?

A. Send a private message to me here or on the Facebook page: https://www.facebook.com/TogetherWeAllAreMighty/ 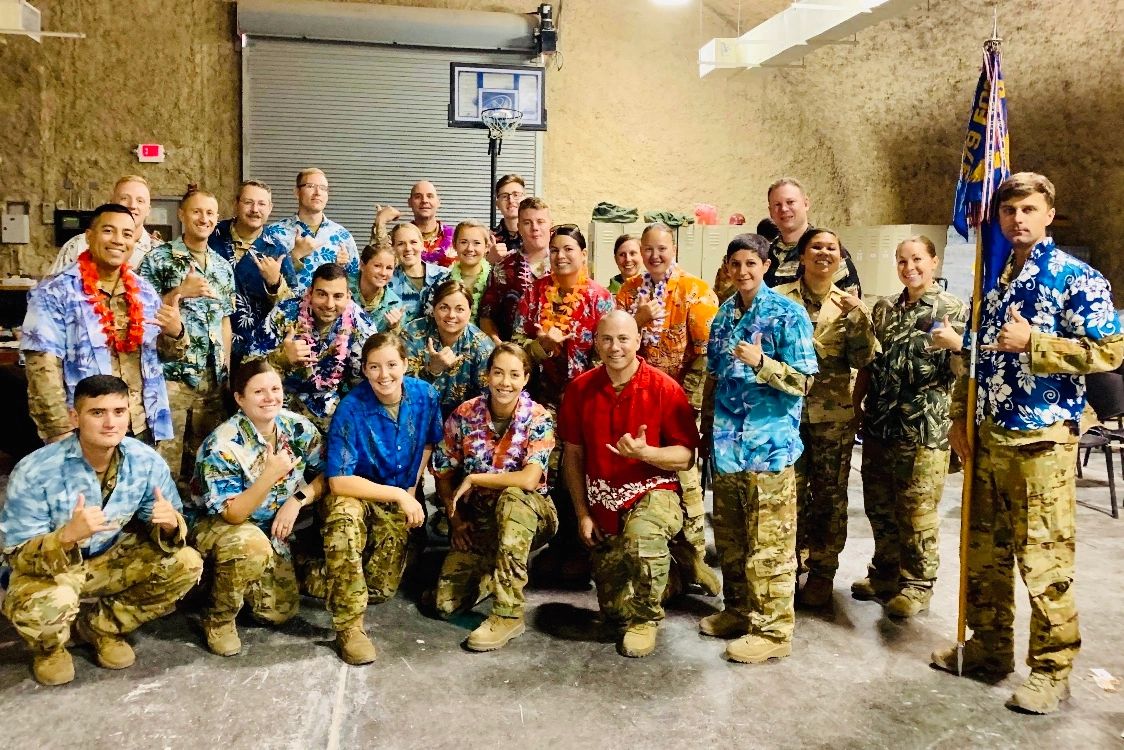 There's much to see here. So, take your time, look around, and learn all there is to know about us. We hope you enjoy our site and take a moment to drop us a line. Supporting our military members is so important. What better way to start than by reaching them while they are overseas!

Your support and contributions will enable us to meet our goals and improve conditions. Your generous donation will fund our mission. Our goal is to reach as many deployed military members as soon as possible, while they are still overseas. Help raise their morale with Hawaiian shirts while they are serving our country. It is time to let our deployed heroes know how much we care!